The NRLA Data Observatory is a collection of official and other well-established data sources which when combined, provide a narrative of the Private Rented Sector (PRS). The NRLA tracks approximately 45 key data sets which are updated monthly, quarterly and annually. A selection of these data sets appear in these pages. 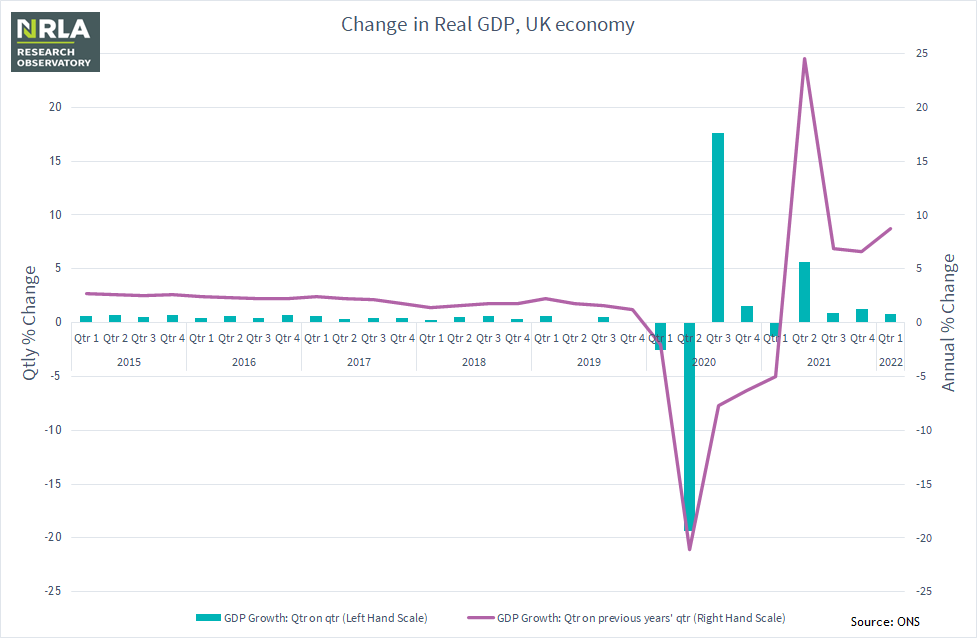 UK gross domestic product (GDP) is estimated to have increased by 0.8% in Quarter 1 (Jan to Mar) 2022, and by 8.7% compared with Quarter 1 2021. This is the lowest quarter-by-quarter growth since Q1 2021. Further evidence the economy is slowing down comes from the ONS monthly GDP figures which in March fell by 0.1%, following zero (0.0%) growth in February (note that the methodology for Quarterly GDP differs from that for monthly GDP - the quarterly figures are not a simple aggregation of constituent months).

Construction is however stronger than other sectors of the economy -  construction output rose by 3.8% in Quarter 1 2022 and is now 1.9% above pre-coronavirus pandemic levels.

There is much debate as to whether growth in the UK - and its recovery from Covid-19 - is ahead of, or behind, other economies. Much of the debate is political and dependent on the data selected. This technical paper, produced by the ONS, outlines the complexity in making international comparisons.

Note that GDP is always subject to some revision. The ONS warn in their reporting that GDP estimates are "subject to more uncertainty than usual". The NRLA track the first quarterly estimate series. Because of Covid-19, differences between this estimate and subsequent estimates can presently be large: In 2021 Qtr3 for example the first estimate (as reported here) for quarter-on-quarter growth was 1.3%, but this was subsequently revised down to 1.0% growth.

You can read more about the current performance of the UK economy here. 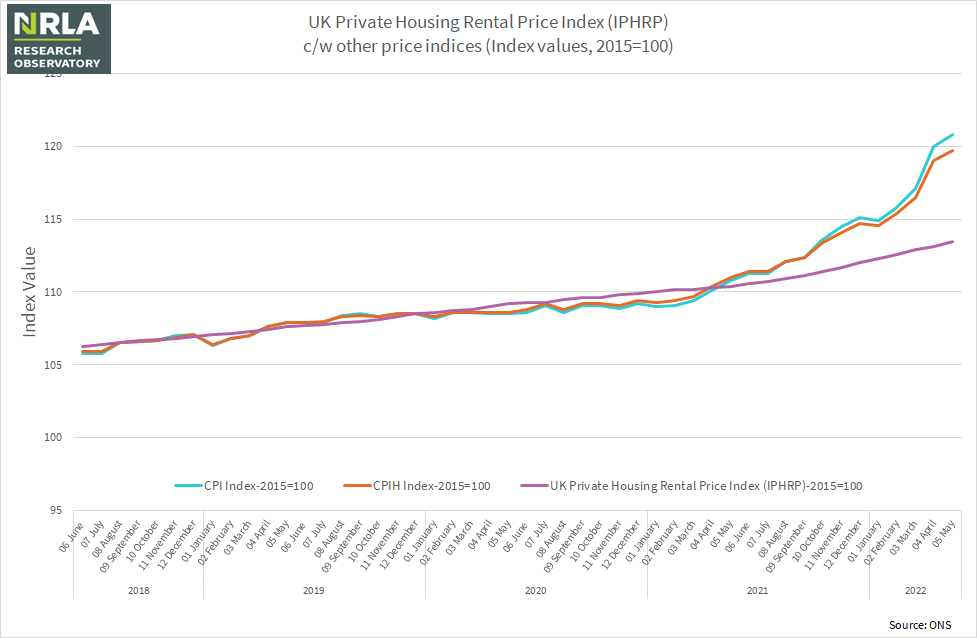 The chart above focuses on price changes in the economy since 2018. It shows three different measures of price change.

Firstly, the Consumer Price Index - The CPI is a measure of consumer price inflation. It is the preferred measure for inflation targeting and uprating state pensions and benefits. CPI is also the international standard for comparing inflation rates between countries.

Secondly the CPIH, this index factors in the housing costs associated with owning, maintaining and living in one's own home. CPIH also includes Council Tax. The ONS describe the CPI(H) as “the most comprehensive measure of inflation.”

Finally, the chart shows the Index of Private Housing Rental Prices (IPHRP) – an index which tracks the prices paid for renting property from private landlords in the UK. It includes a range of new tenancies as well as longer rental agreements.

The IPHRP index has risen every month since August 2021. In August 2021 the index was showing annual growth of just 1.3%. The rate of price growth has more than doubled since August (this is NOT the same as prices doubling, but rather the rate of change has doubled).

For the UK price growth of 2.8%pa is the highest annual growth recorded since Northern Ireland data was added in 2016. At a GB level the index was also 2.8% - up from 2.5% in April. This IS the highest annual rate recorded (for GB the Index began in January 2012).

In October 1981 some of you were settling down to watch Brideshead Revisited or perhaps dancing to The Birdie Song. Either way you were trying to forget the 11.7%pa inflation at the time. If it is any consolation, there is still some way to go before the inflationary peak of that particular cycle is equalled – May 1980 saw inflation running at 21.9%pa!

The IPHRP is clearly lagging behind the other price indices. Our Landlord Confidence Index highlights a crucial reason why – each quarter between 60-75% of landlords declare they have held rent levels constant over the previous twelve months.

Whilst other indices published by property agents report on new tenancies, the IPHRP gives weight to existing tenancies too. As our index shows, many landlords opt not to increase rents annually. This is a key reason for this differential.

For more details about the most recent inflation figures and its constituents, please see this analysis published by the ONS.

The IPHRP (Index of Private Housing Rental Prices) is “an experimental price index tracking the prices paid for renting property from private landlords in the United Kingdom.” (ONS). For more information on the IPHRP and how the ONS are planning to make further improvements to measuring rental prices, see this article here.

Like the other price indices, the IPHRP is compiled by the ONS. It is the best available measure of housing costs in the Private Rented Sector amongst both new and existing tenants. This article, written by the ONS explains why this measure is a more complete, more robust measure of price changes in the PRS than other industry-generated measures.   The ONS report on the IPHRP now acknowledges the lag between price changes in new tenancies and the index. 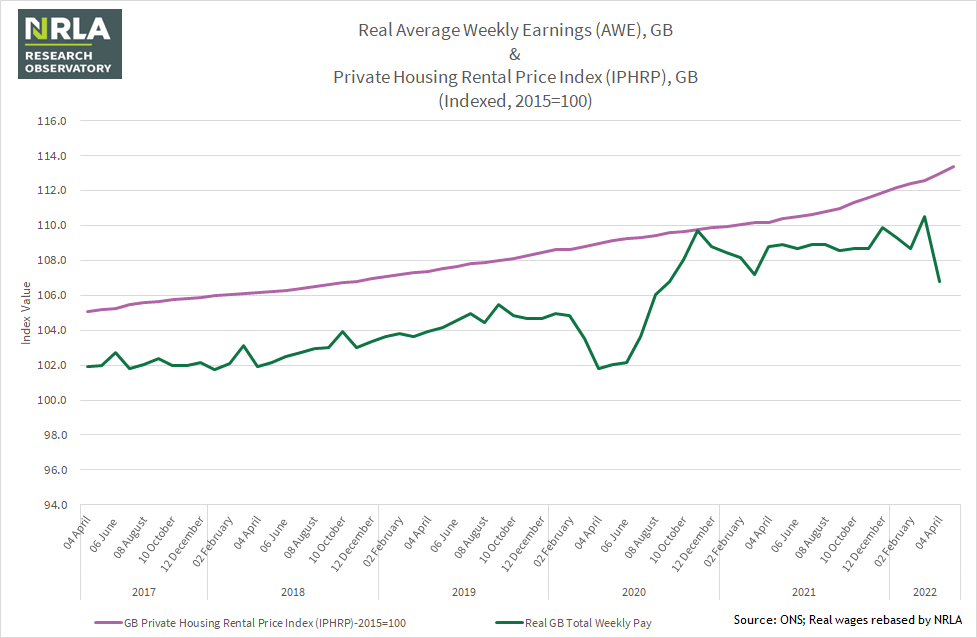 This chart shows the growth in real wages (allowing for inflation) against the growth in the IPHRP.  Note that the latest figures here are May 2022 for the IPHRP and April 2022 for wages. We have rebased the wages data so the base period matches that of the IPHRP.

It is important to note that the measure for wages presented in this chart is based on real total pay – which includes bonuses (and wage arrears). Bonuses have previously inflated wages - whilst annual wage growth based on this measure has been positive since December 2021, regular pay has been negative.

However, in April total wages fell by 2.7%pa compared with last year. This is the largest fall since March 2013 (-2.9%pa growth). Average real wages (including bonuses etc) were £529pw (in 2015 terms) in March, but had fallen to £511pw in April. This steep decline is reflected in the fall in the wage index graphed above.

Regular annual pay growth (excluding bonuses) meanwhile was again negative (-3.4%) once adjusted for inflation. This is the sixth consecutive month of annual falls.

[Note: Wage data is prone to revisions, which can be significant. For example in February 2022 the ONS reported annual real wage growth for December 2021 was 0.1%pa. In March this was revised upwards to 1.0%pa. Note that the data on wages is based on surveys of employers and do not include self-employed workers.]