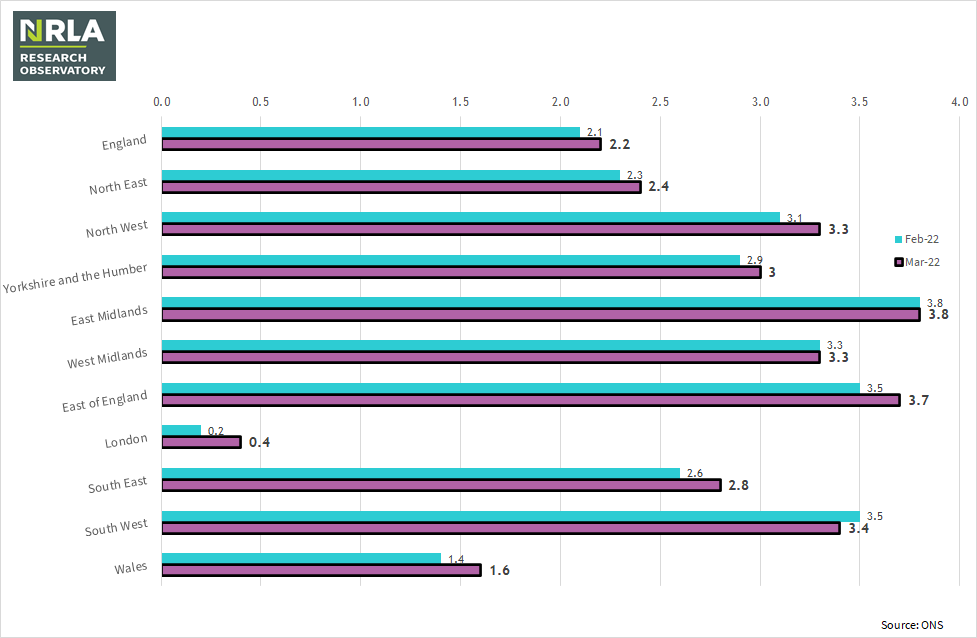 This chart shows the annual growth rate in the IPHRP for February and March 2022 across the English regions and in Wales.

For comparison, in March the CPI stood at 7.0%pa and the CPI(H) was 6.2%pa. Though not shown, the Retail Price Index (RPI) stood at an eye-watering 9%pa in February. So the growth in rents now being recorded by the IPHRP must be kept in perspective.

The IPHRP looks at all rents, not just new tenancy agreements which is often the basis of analysis undertaken by larger property agents.How the IPHRP is constructed is summarised here.

For March, only in one English region was the annual rate of price increases lower than for February. This region being the South West - where regular readers of this blog know the IPHRP has experienced sustained rental price growth.

Even though March saw the slightest cooling in the South Westv- from annual growth of 3.5% in February to 3.4% in March - this region has now had six consecutive months of annual growth above 3%pa. This is the highest sustained growth a region has seen since 2016/17 (South East region)

In the North East (2.4%pa growth) price growth is the highest the region has experienced since April 2009.

In April 2020 the annual rate of growth in rental prices in the North West stood at just 0.9%pa. Fast forward two years and the rate of growth has accelerated to 3.3%pa - the fourth consecutive month this region has had the index in excess of 3.0% pa

There are signs too that rents in London are growing. Although rent increase in London continues to be lower than that of the other regions, growth of 0.4%pa is the third consecutive month of growth. The last time growth in capital rents was so sustained was Jan-Mar 2020. That is, the three months immediately before lockdown. 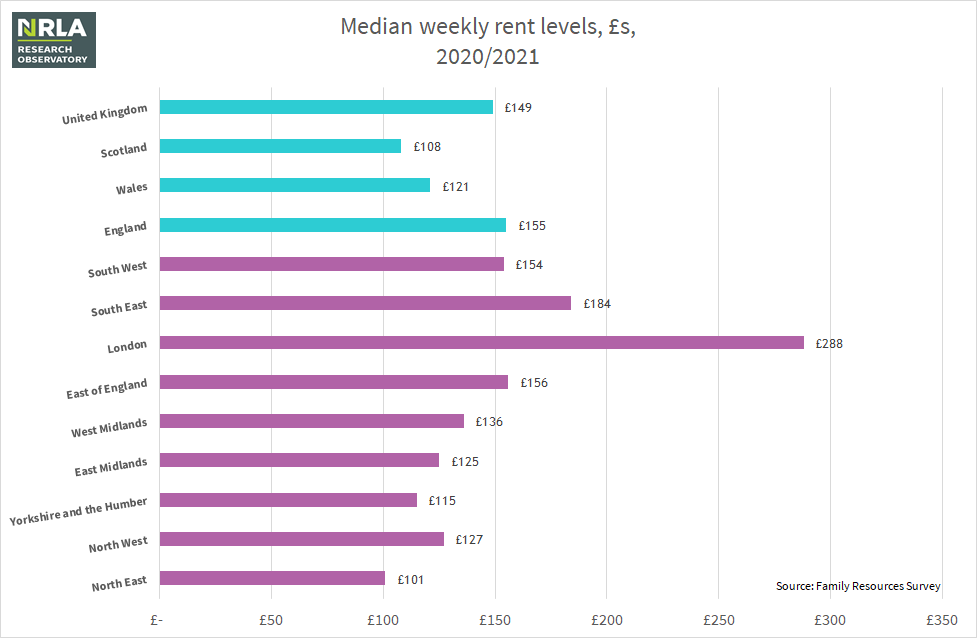 Data collection for this survey took place between April 2020 and March 2021. This rent information is therefore not a snapshot at a moment in time, but reflects rent levels across the entire research period. Given data collection problems with this specific version of the Family Resources Survey (FRS), time-series comparisons at a regional level are not necessarily meaningful. There is certainly a discrepency between the changes in regional rent levels since the previous FRS and the regional price indices data reported above.

However the survey remains useful regionally as a comparative tool:

Each of the above observations are consistent with the previous Family Resources Survey.

Note that some of the data in this section is subject to updates and revision by UK statistical agencies.  The NRLA may, or may not, update this secton as data is revised