The NRLA recognise the advantages adopting a so-called “Property MOT” could bring as a replacement for the myriad of local licensing schemes. Using safety certificates, rather than local authority inspection, the MOT is seen as a mechanism to drive a uniform approach to standards. This incorporates current, necessary checks on gas and electrical safety as well as a range of less frequent checks such as EPC rating.

The landlord would also check and self-certify against a range of health and safety criteria and uploads gas, safety and energy certifications. The issuing of a single "MOT" gives a prospective tenant the assurance the property meets all necessary standards.

Property MOTs have been mooted as a light touch, self-regulating opportunity for landlords to demonstrate good practice and give assurance to tenants. This would also mean lengthy licence applications and administration costs would be avoided.

Property Passports and the MOT

Property MOTs formed part of the Property Passport scheme, which was originally mooted by The Letting Industry Council (TLIC) to  rapidly improve the quality of accommodation the fairness of local licensing schemes. In action, the passport scheme would:

Introducing these measures has been suggested as an alternative to the various additional and selective licensing schemes currently in place. As the MOT forms the most important aspect for landlords and tenants, the NRLA asked landlords for their opinions.

In the most recent of these surveys, landlords were given a brief description of how a Property MOT would work in practice and asked if they thought such an idea would be beneficial. 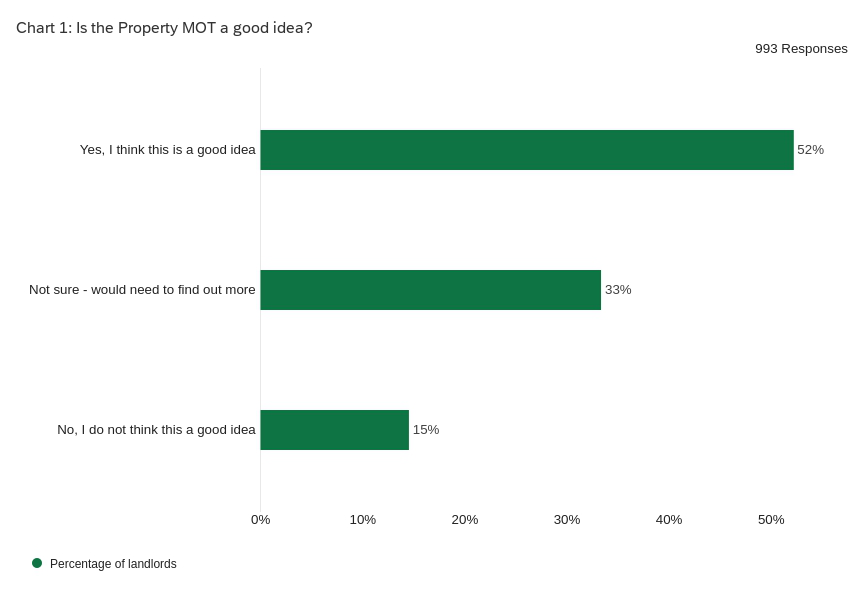 Over half of landlords believe the Property MOT is a good idea (52%). It should also be noted that a third of landlords withheld judgement until they had a deeper understanding of how the MOT would work in practice. These results show a large majority of landlords are at the very minimum open to the idea.

These results are similar to the results collected in Q4 2019, with over 80% of landlords being open to the idea of a Property MOT.

Landlords were asked what made the prospect of a Property MOT most attractive to them. 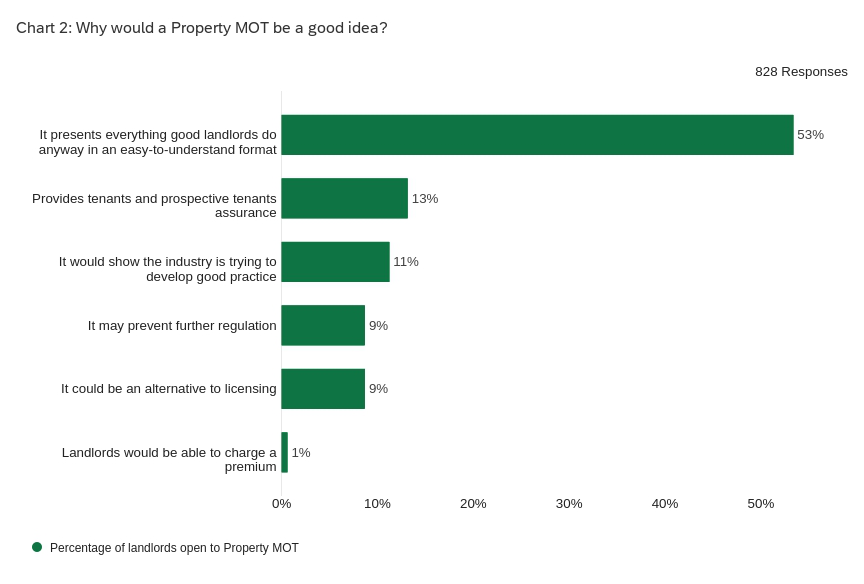 Amongst those landlords who were open to the idea of a property MOT, the number one reason was its presentation of important data in an easy-to-understand format (53%). Collating all of the essential documentation that landlords are required to obtain into a single checklist could seemingly make landlords lives easier.

Landlords noted a Property MOT would provide assurance to tenants (13%), this shows some landlords are keen to provide reassurance to prospective tenants, showing all of the relevant documentation is in order. Landlords also noted that an MOT would show the industry developing good practice (11%). These two points highlight landlords being supportive of Property MOT's due to their potential positive effect on tenant perceptions and the image of private landlords in general.

Landlords who were unsure about Property MOTs and those who were not in favour were asked why they may not be in favour of their introduction. 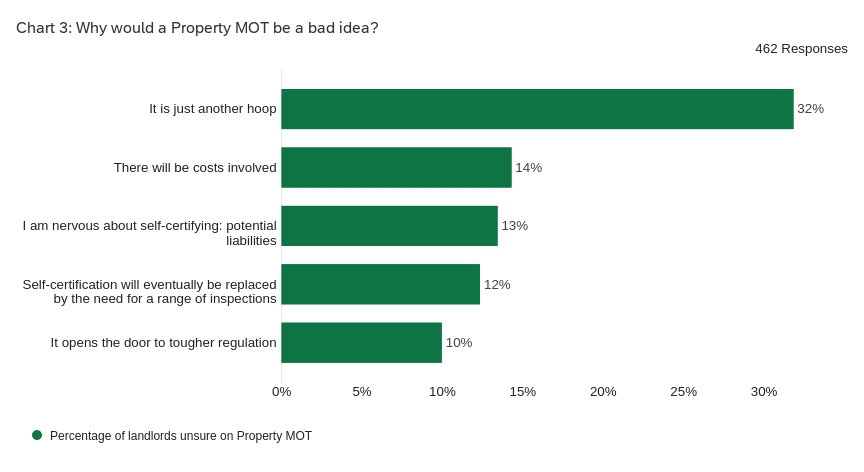 Amongst landlords who were against the introduction of Propery MOTs and those who were unsure either way, the biggest fear was the MOT becoming just another hoop for landlords to jump through (32%). This remains the largest concern with Property MOTs. The earlier Q4 2019 survey also showed this as the most pressing concern.

Despite the Property MOT being introduced as an alternative to licensing, landlords are seemingly wary of additional regulations in a sector currently fraught with "hoops" to jump through.

The next most pressing concerns stemmed from uncertainty on how the Property MOT would shape up in practice, landlords were concerned about:

Landlords were also wary of the Property MOT represented the first step for increased regulation, some landlords also identified:

What landlords need from a Property MOT 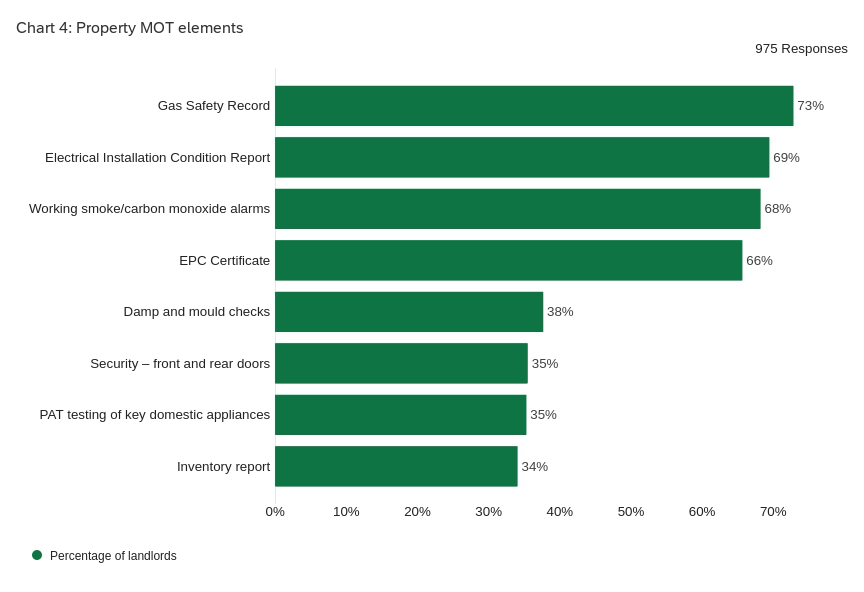 There are clearly 4 elements that landlords have isolated as crucial to their business should Property MOTs be introduced:

Over 65% of all landlords recognised these features as key elements of the Property MOT.

Damp and mould checks was selected by 38% of landlords despite over two thirds selecting this option in 2019.  Other elements such as security features and inventory reports remained lower on landlords' lists of priorities.

Landlords who were favourable have noted the ease of use as a key factor for their support. This may also highlight deficiencies in the clarity of the current system. The assurance Property MOTs could provide tenants and promotion of good practice also noted.

A reasonably high proportion of landlords withheld support due to wanting to know more about how the Property MOT would look in practice. Concerns over potential costs and liabilities, as well as future, heavier regulation futher down the line would need to be dispelled before landlords support this innovation wholeheartedly.

There is however an appetite amongst landlords to change how standards are maintained and enforced within the private rented sector, and the Property MOT could become a tool which would be supported by landlords if introduced correctly. 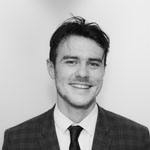 Aidan Crehan is the Research Assistant for the NRLA. Aidan is a politics graduate who has previously worked with Northern Ireland's Department for Communities, specifically focusing on community reconciliation projects. Aidan works closely on the NRLA's various research outputs, looking at issues such as possession, regulation, and enforcement.