Housing and the affordability of the private rented sector are hot button topics at the moment, and a focal point for government policy has been the reform of laws governing the repossession of property in the sector.

The Queen’s Speech confirmed the proposed scrapping of Section 21. This means Section 8 will be the only route for landlords looking to repossess property, the grounds-based process which is often criticised for its lengthy delays.

To assess how the Government is dealing with this issue, the NRLA made several freedom of information requests for data on repossession waiting times to supplement Ministry of Justice data which can be found on our Observatory page.

The following post provides an analysis of the national and regional repossession data obtained. This follows on from our analysis of London’s waiting times, as the second piece in a series of articles focusing on the process of landlords seeking possession.

The latest quarterly data from the Ministry of Justice (MoJ) indicates that waiting times from initial repossession claim made by landlords to the courts, to a bailiff enforcing the repossession of said property, took a national mean and median average of 22.6 and 16.6 weeks, respectively.

NRLA research shows that 96.8% of grounds-based repossession claims include rent arrears as a cited reason, proportions of these claims include other common factors such as anti-social behaviour and damage to property. Considering the average monthly rent in England is £700, a wait of between four and six months for the repossession of property is a significant financial strain on landlords.

Alongside the strain on landlords, these delays harm tenants too. Concerns around using the courts mean almost 85% of landlords are likely to be more selective of tenants. This increased selectivity means tenants in perceived risk-groups will suffer the most as they struggle for housing.

BT, a landlord of more than 35 years, told the RLA of his experience with repossession. He specifically mentioned the time taken for court hearings:

“The trouble with Section 8 process is the time it takes to get a court hearing, as this is usually between 5-7 weeks.”

BT also brought up issues of anti-social behaviour, detailing an experience of disruptive tenants. After multiple police calls and complaints from neighbours, the landlord noted:

“It was horrendous, and I knew that I needed to gain possession of the property as quickly as I could because of all the disruption to the neighbours. By using Section 21 I was able to do this-the Section 8 route could have taken months.”

This case study highlights the importance of an efficient mechanism to regain possession. The majority of landlords are not averse to giving grounds for repossession, but they are averse to excessive waiting periods between claim and enforcement.

No improvement on the horizon

As shown in chart 1 below, over the last 10 years the median average time for repossessions has fluctuated around 16 weeks whilst the mean average has lingered around the low to mid-twenty-week mark.

There is no sign of a downward trend in time emerging between claim and bailiff enforcement. In fact, the median average time has been recorded at 17 weeks or above twice in the last five years whilst the mean has been recorded as high as 31.4 weeks. 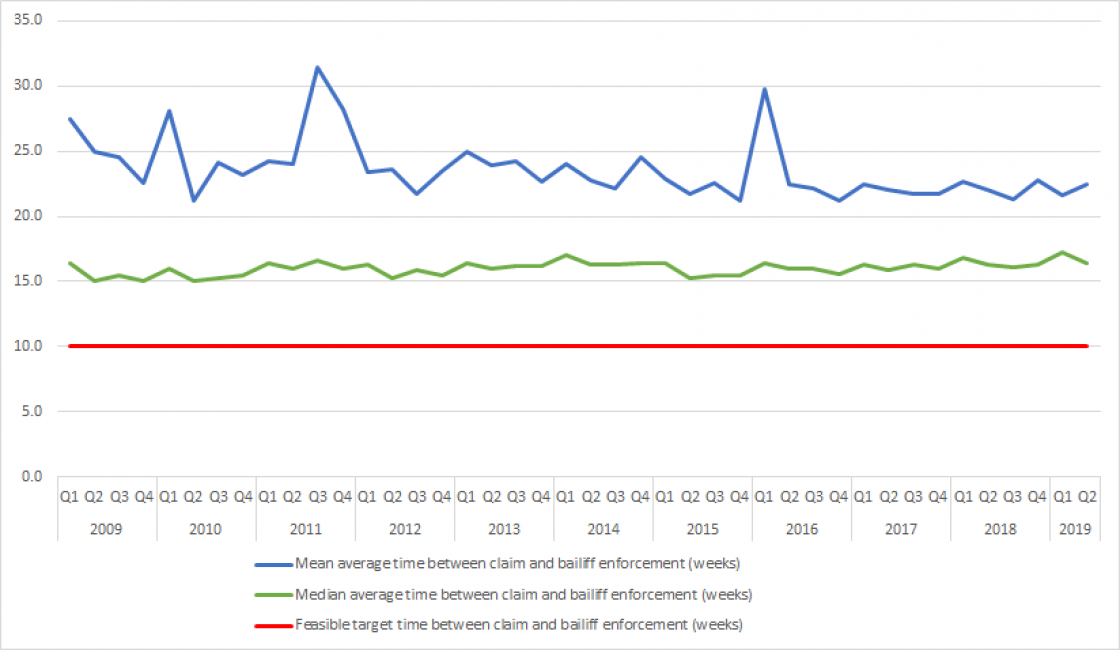 The red line at 10 weeks indicates the feasible target time for bailiff enforcement from an initial repossession claim.

This figure is based on timeframes outlined in the Civil Procedure Rules for possession action; the code of practice that governs how courts operate. It is stated repossessions should be dealt with “expeditiously and fairly”. This figure is broken down as follows:

Neither mean nor median waiting time is reasonably close to – or exhibiting a trend towards – that 10-week mark. There is no evidence of any sustained improvement in performance over this period.

Figure 1 shows a regional map of quarter 3 mean waiting times in 2019 for bailiff enforcement. What can be seen from this quarter is waiting times being especially long in the South East, the Midlands and the North East. In these regions mean waiting times are around the low to mid-twenty-week mark

The regions with the shortest waiting times are still over a month above the target claim to enforcement waiting time of 10 weeks. 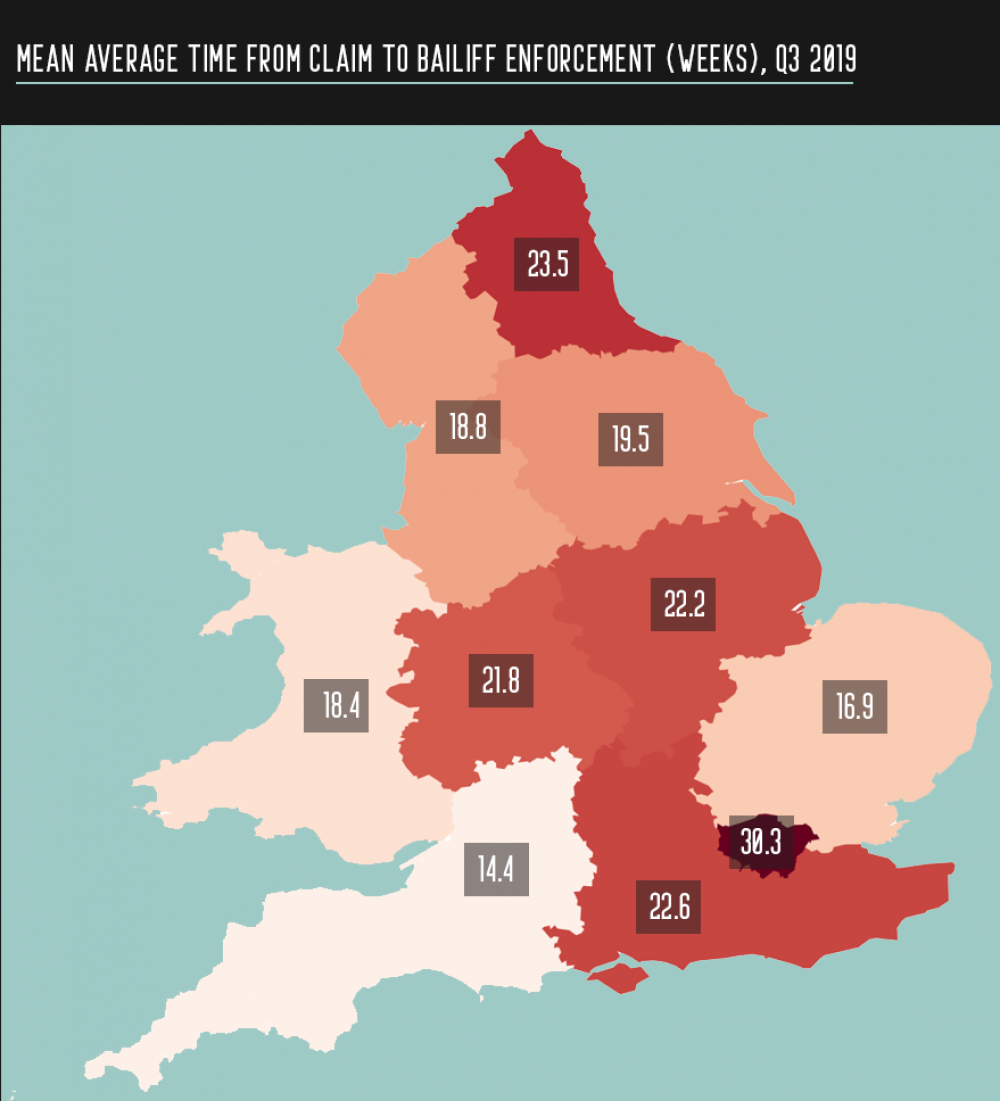 As with the national average, there is no consistent improvement over time. Regional percentage increase in waiting times is scattered, as shown in figure 2 below.

The change in waiting times in the space of a year varies. From Q3 2018 to Q3 2019, substantial improvement can be seen across the East of England, Wales and the South West.

Increases in waiting times occur across almost all easterly regions, with the South East increasing most notably. If this continues these regions threaten to replicate the problem pattern of London whereby waiting times continually rise.

The disparity in enforcement times may be due to difficulties retaining bailiffs in these regions. The next instalment of this series will investigate this. 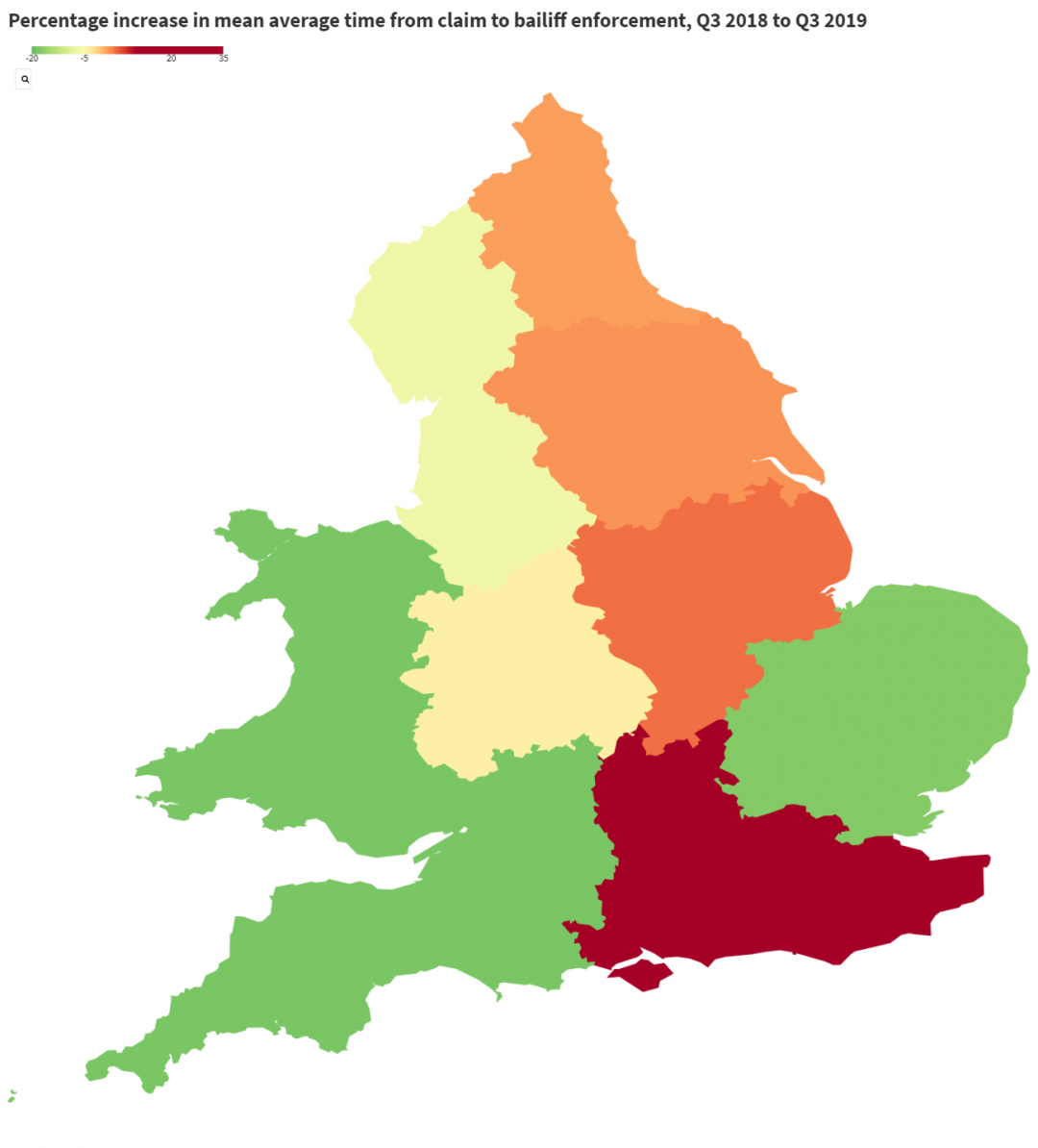 The increases and decreases shown in figure 2 do not show a consistent pattern overall. If the example of Wales is focused upon, the erratic nature of repossession waiting times can be highlighted.

As shown in chart 2 below, over the course of two years, times fluctuate around 20 weeks with no discernible pattern.

With the latest quarterly data indicating there were a total of 58 repossessions in Wales, making up just 0.03% of all national repossessions for that quarter, waiting 18.4 weeks for bailiff enforcement is excessive.

Analysis of these regional averages highlight an inconsistent picture:  wait times vary drastically from region to region, and quarter to quarter. Holes seem to be plugged in one region, on a temporary basis, before another hole emerges in another area of the country.

Both the mean and median waiting times from repossession claim to bailiff enforcement have shown no movement over the last ten years.

The target waiting time of 10 weeks has not been attained, in fact the shortest average waiting time of the last ten years is still over a month longer than this. Not one region achieved this 10-week benchmark for even a single quarter in this study period.

With landlords no longer able to use Section 21, the grounds-based court process requires significant reform to ensure this process quickens up, as this will be a landlord’s only means of gaining possession of property.

The RLA proposes the creation of a properly funded specialist housing court to ensure these matters are dealt with efficiently.

This article was written by Aidan Crehan, NRLA, the views expressed here are the author’s own and not necessarily those of the NRLA.

Thanks to Nick Clay, John Stewart and James Wood of the NRLA for their input on this article.

Any errors which remain have been made by the author. This post was amended for clarity (not content) as a result of comments from readers of the post.