Blog: Evictions - the here and now

On the day the courts reopen to hear repossession cases Paul Shamplina, Founder of Landlord Action shares his thoughts on the latest changes and what they mean for tenants.

Covid-19 has delivered the world with a fast moving and very confusing set of rules, which have been difficult for everyone across all sectors to keep up with.

The impact on the private rented sector has already been extensive, therefore it is no surprise that landlord confidence is fairly low after the latest change to the rules, which will mean further delays to the eviction process.

Landlords, understandably, have reacted with disappointment and anger after the Government announced more changes to the coronavirus legislation.

These changes mean landlords must now give tenants six-months’ notice when repossessing homes (until at least 31 March 2021) for most kinds of eviction notices, including Section 21.
I think everyone has some empathy with the Government that they have had an almost impossible job trying to keep everyone happy and housed in such unprecedented circumstances.

The measures relating to the private rented sector, which as we know have been amended several times, have been put in place to help sustain tenancies and prevent homelessness, particularly now the furlough scheme is coming to an end.

The downside, of course, is the impact this has had on landlords and availability of rental homes.

Where are we with notices?

However, several dispensations have been made to Section 8 notices to assist those landlords with the most serious cases. These are:

It has never been as complicated as it is now and the most challenging cases to prove are those of anti-social behaviour.

Courts judge cases on the evidence provided, which can be a task in itself, as neighbours are often reluctant to provide witness statements, and then it comes down to getting that case in front of the judge.

There must be proof that the tenant has caused a real nuisance to the landlord, people in the surrounding area or co-tenants.

It will require those affected to keep a diary, provide police reference numbers and anything else to support their case.

It’s an evidence-based process like never before.  We have rarely used ground 14 due to its discretionary nature, mainly because you can provide the judge with all the evidence, but the tenant can present an array of defences which can mean the judge does not grant the possession order.

However, given the changes, where there is a serious case of anti-social behaviour and the tenant needs to be evicted as quickly as possible, it is likely we will see more landlords having to rely on this.

The changes also mean the Government has had to extend the window that a Section 21 notice is valid for from six months to ten months.

This is because the notice period would end on the same day the eviction itself expired, meaning Section 21 evictions would be impossible. Landlords will now have an additional four months to issue their claim at court after the expiry of a Section 21 notice.

Let’s be clear, in my opinion, I think Section 21 will be abolished within the next 12-14 months.

We have been involved in a report commissioned by the Lettings Industry Council called ‘Beyond Section 21 – Evidencing need and processing a model for change’.

The main factor the Government has to understand is that there could be unintended consequences of scrapping Section 21 if they do not put major reforms and measures in place to show landlords they can get their properties back in a timely manner.

The report recommends mediation, major investment in the court system, and having bailiff reform.

Many landlords have been put under an enormous amount of strain, trying to cover mortgages while receiving reduced or in some cases no rent.

With that said, I have never seen so much engagement, with landlords doing some amazing things to help support their tenants, many of which I don’t believe have been given the recognition they deserve.

What it has also shown us is resilience, and despite all the challenges, those that have been able to form strong relationships with their tenants stand to benefit in the long-term.

This is something which is going to be extremely important going forwards. We understand that the bottom line is that landlords want their rent or their property back.

However, with six months’ notice and then waiting for a court hearing, the reality is that it may take landlords 12-14 months to regain possession unless they can encourage their tenant to work with them to reach an agreement. That is where mediation comes in.

At Landlord Action, we have now introduced a service for landlords where we will draft and serve an eviction notice on the tenant and, shortly afterwards, contact the tenant to implement our mediation service.

Some landlords and tenants are reluctant to try mediation, but we have seen some excellent results where relationships had previously broken down.

Landlords have been able to agree repayment of rent and negotiate the return of their properties to avoid the lengthy court process.

With a six-month notice period, landlords have nothing to lose in undertaking mediation and it is something we are actively encouraging our landlords to do.

Even if the case does end up at court, it will only benefit them in providing evidence that they have tried to engage with their tenant.

Covid-19 has taught us all some valuable lessons in communicating, adapting and supporting one another, and I’m confident that landlords will continue to take this approach and find new ways to make their buy-to-let businesses successful. 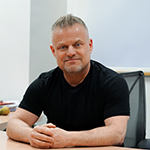 Involved in the legal system since 1987 - specialising in landlord/tenant disputes. As a certified bailiff he acted for landlords across the country. He is the recognised expert and is often featured on TV, Radio and in the press. Paul hates to see injustice and he campaigns for the good of all landlords. He is on your side. Or he’s just infront - making sure you’re protected.

See all articles by Paul Shamplina