Budget: What it means for landlords

Despite some early speculation to the contrary, this week’s Budget was a fairly neutral one for private landlords.

Although the chancellor, Rishi Sunak, set out the beginnings of recovering Covid expenditure, individual landlords didn’t see many changes to their tax burden.

Covid spending will continue for the next six months, during which there will be some gradual tapering off for some measures.

In terms of tax rates, those for individuals remain frozen, whilst higher profit businesses will see corporation tax increase from 2023. Those with profits under £50,000 per year will remain at the 19 percent rate.

Some NRLA calls were answered – the Government extended the £20 uplift on Universal Credit, although only for six months. And there was no increase in capital gains tax – but we expect this will be a temporary reprieve. Keep an eye out for further information later in the year on our proposals for what the tax regime should look like for the private rented sector.

Our key immediate priority remains a financial support package to help tenants and landlords facing rent arrears due to the impact of the pandemic. While there was no announcement this week, you can help push the Government on this by writing to your MP.

There was further good news for those considering selling with no change to capital gains tax rates. The annual exempt amount remains at £12,300 for individuals, and £6,150 for most trusts, and is frozen until April 2026. We expect, though, that capital gains tax will remain on the Treasury’s radar as a future option for revenue raising.

Income tax thresholds will also be frozen until April 2026, following planned increases for the next tax year. The personal allowance will reach £12,570 from April 2021, and the higher rate threshold will be £50,270.

For some incorporated landlords, there will be changes – but not until April 2023. The Government is introducing a Small Profits Rate for corporation tax, which will apply to profits under £50,000 per annum. This will be set at 19 percent – steady with current corporation tax.

There will be a tapering of the rate for profits above this level, up to a maximum of 25 percent for profits over £250,000 per annum. No details have yet been released about what the taper will look like.

On the plus side, the chancellor announced the VAT registration threshold will remain at £85,000 until 2024. And National Insurance contributions thresholds will rise in line with inflation for 2021/22 before being fixed until April 2026.

Finally, for those landlords considering leaving assets in their wills, the inheritance tax threshold will be frozen until April 2026 at £325,000.

As was trailed in the media ahead of the Budget statement, the furlough scheme has been extended till the end of September.

Self-employment income support also continues until then, with two further grants available in April and from late July.

The emergency Universal Credit uplift of £20 per week was extended for a further six months – a welcome step, although more needs to be done in the longer term.

In addition, there will be a one-off payment of £500 to eligible Working Tax Credit claimants.

All of these measures are due to end by the end of September. It remains to be seen whether the economic recovery bolstered by the vaccine rollout will be sufficient to avoid widespread uncertainty again then. 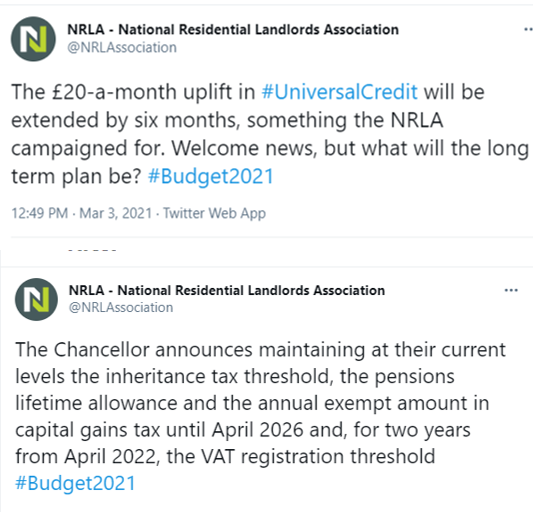 The Government also brought forward some planned changes – from April this year, Universal Credit advances, which cover the period before the first payment of Universal Credit kicks in, will be recovered over 24 months, with a maximum deduction of 25 percent of the standard allowance. This change was originally due to take place in October.

Additionally, care leavers up to age 25 and those aged under 25 who have lived in a homelessness hostel for at least three months will be exempt from the Shared Accommodation Rate (SAR) for local housing allowance. The SAR limits the amount of local housing allowance that a single tenant under 35 years old is eligible for to the cost of a room in a shared property. This change has been brought forward from October 2023.

Other announcements of interest to landlords

Over £1 billion from the Towns Fund will be given to 45 Town Deals across England, to help ‘level up’ regional towns – mainly in the North and the Midlands. You can see the full list here. The funding will be used to stimulate long term economic and productivity growth.

The Government will reform the penalty regime for VAT and Income Tax Self Assessment, to a points-based system with a financial penalty only when a certain threshold is reached. This will come into force for VAT taxpayers from 2022/23 tax year, for taxpayers with business or property income over £10k per year from 2023/4 tax year, for others from 2024/5 tax year.

Budget Live: NRLA deputy director of policy John Stewart gave his reaction to the Budget live on our Facebook page shortly after the Chancellor's speech