Introduction: The threat of rent controls

London’s current mayor - Sadiq Khan – would if re-elected, continue to press for new powers from central government to introduce a range of PRS reforms.  These reforms would have a dramatic impact on the sector in the capital.

His proposed London Private Rent Commission would be tasked with developing a system of rent control which would attempt to:

The reality of rent controls

Prior to the creation of the NRLA, the RLA took a close look at rent controls. Drawing on the experience of those cities where rent controls had been introduced, the report concluded the Mayor of London’s approach to rent controls was based on an approach which:

The report foretells the difficulties individual cities such as Berlin have had in creating a legal, viable rent control framework. In Berlin there is evidence of each of the above drawbacks. Just last week, Germany’s highest court ruled Berlin’s rent caps were illegal.  This is the latest blow to the city’s rent control regime which are now evidentially damaging tenant choice and landlords.

The Berlin evidence also shows that would-be tenants become “locked out” of cities whilst residents of rent controlled accommodation remain in situ.

It is also proving costly for the city to maintain rent controls – investment in the city’s housing stock is being choked, and the city’s taxpayers must meet the cost of ongoing court challenges and reviews.

The complexities in quantifying the impact of rent controls on supply, price and future investment in London are however secondary to a rather more fundamental question – are rent controls in the capital city actually needed? The evidence on private sector rent levels on which the NRLA regularly reports suggests the policy is simply not necessary.

The need for rent controls

The Index of Private Housing Rental Prices (IPHRP) is an index tracking the prices paid for renting property from private landlords in the UK. Like other price indices such as the CPI, this index is compiled by the ONS.

It is the best available measure of housing costs in the Private Rented Sector amongst both new and existing tenants.  Other measures of rental price change typically produced by the real estate industry, tend to reflect recent letting transactions. These do not account for longer-held tenancies.

In regular policy surveys, the NRLA consistently report that when asked, most landlords state they have not raised rents in the previous twelve months.

Chart 1 below shows how the IPHRP has progressed since just before the last London mayoral election both nationally and in London. It compares both indices to the version of the Consumer Price Index which includes owner occupiers’ housing costs, the CPI(H).

The ONS describe the CPI(H) as “the most comprehensive measure of inflation. It extends CPI to include a measure of the costs associated with owning, maintaining and living in one's own home, along with council tax.”

Chart 1: The path of rental prices in London 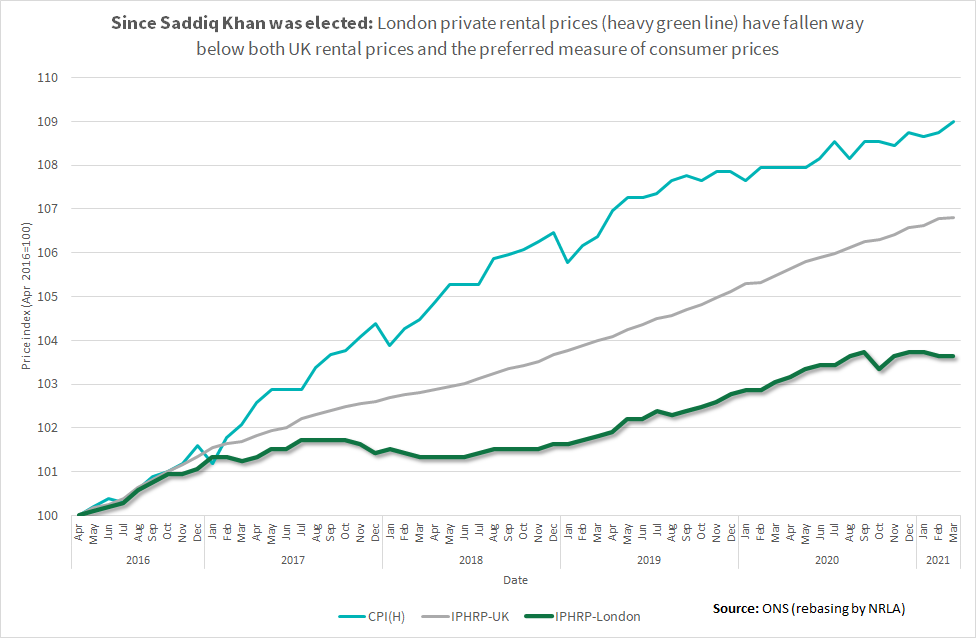 Since April 2016, private rental prices in London have risen just 3.6% compared with a 6.8% increase nationwide (to March 2021). By comparison, the overall measure of the cost of living rose by 9.0% - two-and-a-half times rental price inflation in London.

It has been a long time since “Crazy London Prices” has been a thing. Chart 2 below shows the annual rate of price growth in London, England (in case people may think rents in the other home nations are distorting the UK figure) and then, finally in the South West.

The South West of England is a region to which the NRLA consistently draws attention in the regular Observatory analysis. Chart 2 below highlights the contrast between the South West and London. 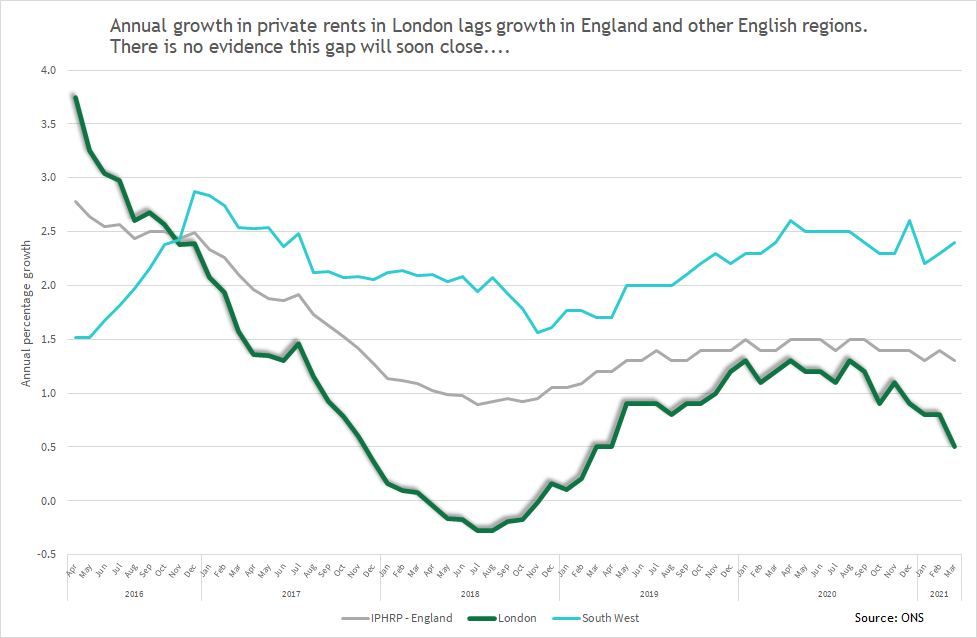 The level of annual price increases began to fall in the capital long before Covid-19 seized up the economy. In 2018 annual price increases were negative in London – in other words, falling.  This negative increase (fall) also shows in Chart 1 – note where the heavy green line slopes downwards, most easily seen in the twelve months ending mid-2018.  Note that rents in the South West have grown at three times the rate of growth in London.

The latest figures (March 2021) show rental prices in London tailing off dramatically. One has to go back to October 2016 for annual rental price growth in London to be above the national (England) average.

With London landlords facing a combination of low rent increases AND the threat of rent controls there is no wonder confidence is low.

Our Landlord Confidence Index consistently shows landlords with portfolios focused in London are among the least positive landlords in England and Wales.   In the last nine quarters, London landlords have featured among the lowest confidence-scoring landlords on seven occasions.

Chart 3 below shows the Landlord Confidence Index scores for London. The results for London are compared to the England and Wales average and the confidence levels in the East Midlands. The East Midlands has been one of the best performing regions in the confidence index (but by no means could be considered “outstanding”, nor is particularly different from several other regions).

Chart 3: Landlord Confidence in London and the East Midlands 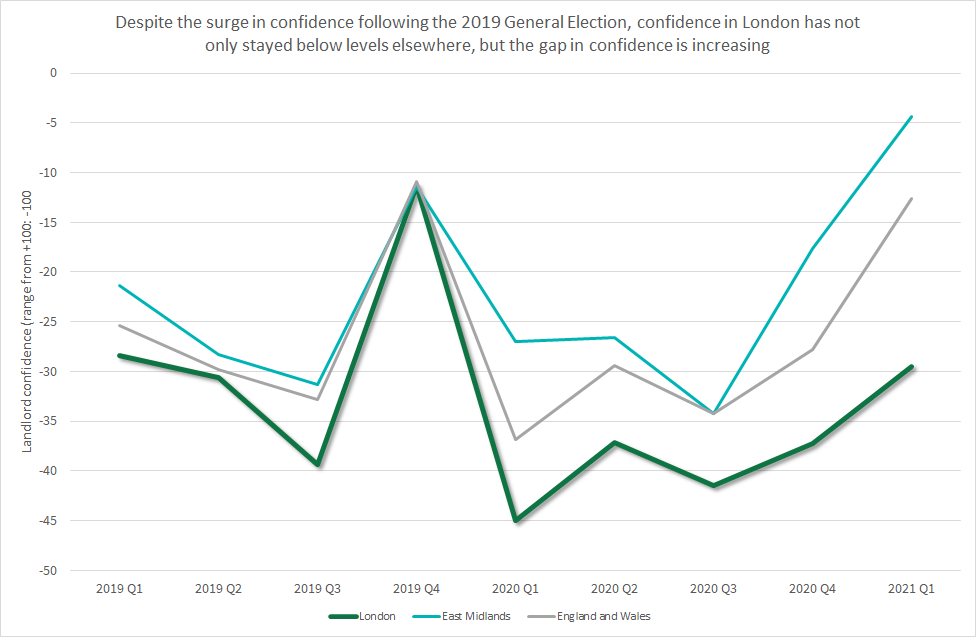 Rent controls may sound an easy solution in areas of high demand. But the truth is they are no panacea to the issue of housing shortages. They instead open a Pandora’s Box of complexities, market distortions and labour market rigidities. Quantitative evidence shows over and over that tenants, would-be tenants and landlords all suffer where rent controls are imposed.

A key question must also be to ask why the need to introduce such controls now? Rents in London are failing to keep up with rental prices elsewhere and are not rising at a rate which is even close to inflation.

Imposing rent controls could mean locking in mandatory annual price rises for tenants. At present many landlords (in fact most landlords in NRLA member-surveys) are currently not raising annual rents.

It will take time for the effects of Covid-19 to unwind in the wider economy. During the pandemic, estimates suggested the resident population of London might have fallen by nearly 700,000.  Getting this population back into London would seem to be a more important priority than the development of what would inevitably become a flawed, unfair rent control model.